The breaking of bread is the practical act of sharing a meal together with other believers, representing their shared unity and faith in Christ.

Summary: What is the big idea of this article?

Early Christian gatherings centered around the sharing of a communal meal in homes. The term, “the breaking of bread,” should be understood as a practical act with spiritual significance. Jesus taught his disciples to remember the significance of his death by associating his sacrifice with the common practice of breaking and eating bread at a meal—the Lord’s Supper, or Communion, as we know it today. Early in church history, Christians began to distinguish between the breaking of bread as a shared meal and as an ordinance. The reasons for distinguishing between the meal and the ordinance were theological and practical, likely in response to the behavior described in 1 Corinthians 11. Today, believers may embrace the biblical vision for the breaking of bread by partaking in Communion in the local church and sharing meals with other believers in their homes.

Word study: What does it mean?

The earliest Christian gatherings centered around the sharing of a communal meal in homes (1 Cor 16:19; Rom 16:5; Philem 2; Col 4:15). When defining the term, we need to consider whether the “breaking of bread” in Acts 2 refers to the practice of sharing a meal or to an ordinance of the church (i.e. “Communion” or the “Lord’s Supper”). In other words, is the “breaking of bread” in Acts 2 a practical or spiritual act? The answer is yes to both. We should understand the breaking of bread as a practical act with spiritual significance. Let’s look first at the term in its practical context. Bread was a staple in the Ancient Near Eastern diet. In Jewish homes, it was common practice to break bread when God was blessed at the start of a meal. Further, the bread would have been baked as a large loaf for a given family, so breaking it was necessary for sharing with one another. For example, Jesus broke the loaves to distribute to the crowd in the miraculous feeding of the multitude (Matt 14:19). The breaking of bread here was less an act of spiritual significance and more one of practical need.

In the New Testament, the “breaking of bread” also developed a spiritual, or theological, meaning. The activity of breaking bread can be understood in two theological senses. First, the broken bread at a meal symbolized the broken body of Christ on the cross. Jesus taught his disciples to remember the spiritual significance of his death by associating his sacrifice with the common practice of breaking and eating bread at a meal (Matt 26:20; Mark 14:17; Luke 22:14). Today, Christians around the world continue to recall the significance of Jesus’ death when participating in the ordinance of Communion. Second, the breaking of bread in the early church was an expression of the believers’ unity and common faith in Christ. We are told in Acts 2 the believers “had all things in common” (Acts 2:44). Yes, even the bread they prepared and ate at the table was in common—one loaf, broken in remembrance of their crucified Lord, and shared among one another.

Biblical usage: What does the Bible say?

The phrase, “the breaking of bread,” is actually just one of five New Testament words used to describe the weekly meal of the early church. We advise viewing these five terms as complementary, not contradictory. Here is a brief overview of the five biblical words in their contexts.

Communion
This word is an English translation of the Greek koinonia, which means “fellowship,” “participation,” or “community.” The word koinonia is used numerous times throughout the New Testament in both practical (Acts 2:42 and the community of believers) and theological senses (1 Cor 1:9 and fellowship with Christ). The English word “communion” does not appear in most English translations of the Bible, though the word has become the preferred way of referring to the ordinance in Protestantism.

The Eucharist
The term is an English transliteration of the Greek eucharistia, which means “thanksgiving” and appears in practical and theological contexts throughout the New Testament. The Eucharist came to be used often in church liturgy and remains the preferred terminology in Eastern Orthodoxy.

The Agape Feast
Translated into English as “love feast,” this phrase appears one time in the New Testament in the context of a meal (Jude 12). The Agape Feast was a primary title given to the meal in the early centuries of the church.

The Lord's Supper
The term occurs once in the actual New Testament text in Paul’s first letter to the Corinthians (1 Cor 11:20). This phrase suggests a full-on meal which included the bread and the cup, probably reflective of the Last Supper in the Gospels.

In church history: How did it get to where it is today?

Early Church Era
We know that early Christian gatherings centered around the sharing of a communal meal in homes. The first disciples no doubt got this directive from Jesus himself, having repurposed the Passover Meal with them before his crucifixion. For the early believers, the communal meal—shared certainly on the Lord’s Day (Sunday) and likely throughout the week—provided more than physical nourishment. The meal was an opportunity to gather together and reflect on the significance of the cross. New Testament accounts regarding the communal meal range from ideal (Acts 2:42) to infiltrated with false converts (Jude 12) to abominable altogether (1 Cor 11:17-34).

Patristic Eras
In the centuries immediately following the New Testament, scholars and historians are unanimous on the fact that the meal was a full meal, around a table, and usually in a home. As early as the second century AD, the church began to distinguish between the shared meal and the ordinance. It is difficult to determine exactly why and when this distinction was made, though most scholars agree that the behavior described in 1 Corinthians 11 and Jude was one of the key reasons for the distinction. Churches in the early centuries took steps to guard against the theological corruptions that often accompanied the shared meal. Formalizing the meal into an ordinance of the church might have helped guard against its corruption.

Practical factors also likely played into the church’s decision to distinguish between the shared meal and the ordinance. Prior to Constantine (fourth-century AD), Christian worship was illegal and subject to persecution, thus forcing believers to center their worship gathering in private homes and around a shared meal. Post-Constantine, Christianity became tolerated, half the empire was converted, cathedrals were constructed, and worship moved from the table to the building. The early Christian gatherings which were once limited in capacity to the size of one’s home were now numbering in the hundreds and thousands. We can see the practical issue here. It would have been difficult to provide a full meal for hundreds and even thousands of people.

Medieval, Reformation, and Modern Eras
Throughout the Medieval era, a steady decline in the regular sharing of a communal meal and the the ordinance of Communion can be observed. Rome corrupted the practice, forbidding believers to participate freely in the ordinance. The Reformers recovered a sound, biblical theology of Communion, but did little to address the practice. As a result, Protestant Churches today have a good grasp on the importance and theology of Communion, though the practice is a bit different from that of the early church. Today, Christians in churches around the world participate in the ordinance of Communion when they gather. Usually symbolized by a piece of bread and a small cup of wine or juice, believers partake of the elements together while soberly reflecting on the work of Jesus. Modern believers will also share a meal together, perhaps throughout the week or following a church service. Virtually all Protestant churches today distinguish between a shared meal and the ordinance of Communion.

It is important to note that this distinction is neither unbiblical nor unfaithful to the commands of Christ. Even if the early church did not clearly distinguish between the meal and the ordinance, what matters most is whether or not the command of Christ to recall his atoning work by partaking with other believers of the bread and the cup is upheld. How then should we understand the ordinance as it is practiced today? The bread and the cup should be understood as a symbol of a symbol. Here is what we mean. The wafer and juice in our Protestant churches today symbolize the full meal—the bread and wine shared around a table—that Jesus instituted. Further, the bread and wine in Jesus’ Passover meal are theological symbols, representing his broken body and spilled blood. Though the practice looked different in the early church than it does today, Christ is honored when his death is remembered by believers partaking together of the bread and cup.

In practice: How can we recover the biblical vision for this element?

Today, believers may embrace the biblical vision for the breaking of bread by partaking in Communion in the local church and sharing meals with other believers in their homes. We will continue to observe Communion as a gathered church in our worship services. In our Groups, we will devote ourselves to the breaking of bread in its practical sense. We will share a meal together each week when we gather. The regular practice of sharing a meal—of breaking bread—with other believers is both biblical and sacrificial.

Sharing a meal together is biblical. In Genesis 1–2, God created and placed mankind in a garden with the instruction to cultivate the earth and eat of its produce. In Genesis 3, the man and woman ate the forbidden produce and transgressed God’s command. Throughout Israel’s history, food symbolized the blessing of toil and was a gift from God (Eccl 2:24). Jesus came eating and drinking (Luke 7:34) and ultimately repurposed the Passover Meal to commemorate his atoning death (Luke 22:14). In the new heavens and new earth, all the redeemed will feast together at the marriage supper of the Lamb (Rev 19:6-9).

In addition, sharing a meal together is sacrificial. Organizing and preparing a weekly meal requires forethought and planning. It demands believers to work together to see it through. Our time, talent, and treasure are all needed if we are to devote ourselves to the breaking of bread. The common meal has always been a labor of sacrificial devotion for believers to prepare and partake. But do we not have the most excellent example of sacrificial devotion in Christ himself, who, in humility and as a servant, bore our sin and God’s wrath on the cross in our place? When we sacrifice to prepare and partake in a meal together, we do so remembering the sacrificial example of our Lord.

Resources on Breaking of Bread 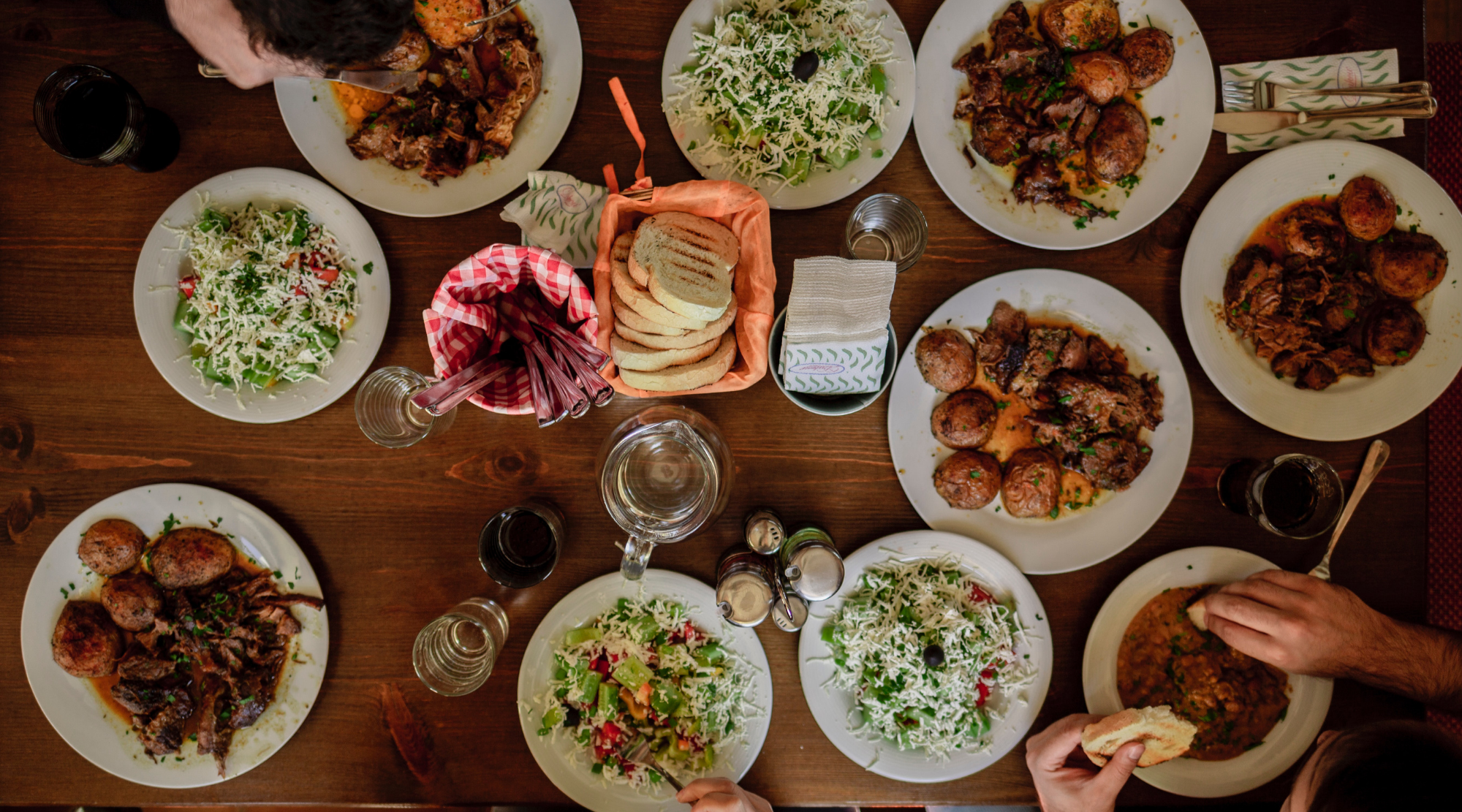 FAQ and ideas for sharing a weekly meal